Company Hopes to Bring Life Back to Historic Area

Springfield Hospital Center in Sykesville to be repurposed into residential, office and park space 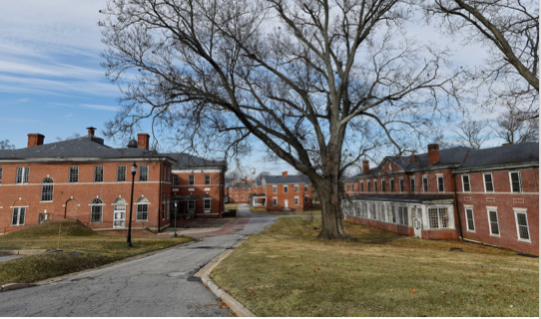 The historic Springfield Hospital Center in Sykesville will soon be rehabilitated and repurposed into a residential and commercial hub, serving the local community while also preserving county open space.The Maryland Department of Housing and Community Development this week announced Warfield Companies would be the first recipient of Maryland’s Catalytic Revitalization Tax Credit, designed to help fund rehabilitation of formerly government-owned properties for economic and community development purposes.

The company received a $15 million state tax credit for its ongoing project to redevelop a former mental health facility in Sykesville and the surrounding area into a mixed-use community. Warfield at Historic Sykesville is anchored by historic buildings dating to the late 19th and early 20th centuries and was used by the Springfield Hospital Center until the early 2000s. Formerly owned by the state, the 12 buildings carry historical designations from the National Park Service and Maryland Historical Trust.

Three of the historic buildings have already been restored and are occupied by commercial tenants. The remaining nine buildings will be repurposed in a variety of ways to meet the needs of future tenants, with some combination of residential, office, light industrial, retail and park space.
This project is expected to include a housing component, as well as a multipurpose space that will serve local residents.

“The redevelopment at Warfield presents a once in a lifetime opportunity for the people of Sykesville to preserve a piece of their heritage by transforming the former Springfield Hospital Center into a residential and commercial hub that will enhance the local community, while preserving prime and productive
Carroll County farmland and open space,” Kenneth C. Holt, secretary of the Maryland Department of Housing and Community Development, said in a news release.

Passed in the 2021 General Assembly session and signed into law by Gov. Larry Hogan, Senate Bill 885 created the Catalytic Revitalization Tax Credit. The bill was sponsored by state Sen. Katie Fry Hester, a Democrat who represents District 9 in Carroll and Howard counties.
The credit is designed to support the rehabilitation and renovation of properties formerly owned by the state or federal governments, including colleges or universities, public schools, hospitals, mental health facilities and military facilities or installations. These properties usually have been vacant for a significant time and often require mitigation of various environmental and health hazards.

“I am thrilled that a community in my district will benefit, and serve as a model for other projects around the state,” Hester wrote in an op-ed to the Carroll County Times. “In Warfield’s example, economic projections indicate a fiscal benefit of $29 million over 20 years for our local schools, health department and the Town of Sykesville. … These millions of dollars represent new revenues generated that can be reinvested in the local community or directed to keep taxes low. Furthermore, the project is expected to create approximately 233 permanent and 69 temporary jobs and generate roughly $40.8 million in economic output over the next 20 years.”

The tax credit was a recommended action that came from a study conducted by the Maryland Department of Planning and is designed to fill financing gaps between the cost of rehabilitation and the market-rate value of the redeveloped property. Proposed revitalization projects related to the rehabilitation of these government-owned properties must foster economic growth, job creation, affordable housing or other community improvements and services.