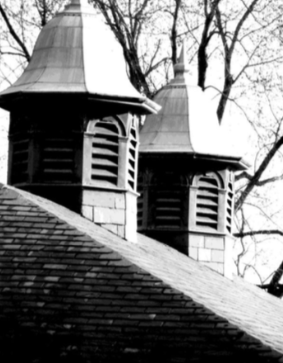 A History of the Warfield Complex Site
Located in the heart of Carroll County’s Piedmont region, the Warfield Complex stands as a monument to the modernization of public mental health care in Maryland. Each building showcases the development of this hospital system as well as the medical culture that was shaped right along with the architecture.

In 1896, the Springfield State Hospital opened its doors. The site was ideal due to its close proximity to Baltimore, which boasted a number of medical and mental healthcare professionals. It also provided access to both central and western Maryland for patients and families. Since the estate was well watered by springs, it also provided irrigation to farms and orchards, helping the hospital to provide much of its own food while giving patients work therapy.

While conditions in other public institutions were often abysmal at the time, the Springfield State Hospital stood apart in the integrated planning of its campus. The site was designed as a group of self-contained clusters of small buildings, which created a more humane environment for patients.

The Warfield Complex, made up of the Women’s Colony buildings, was built in 1899. These initial buildings, known as the Service Group, consisted of the Service Building, along with Buildings A, B and C. The renowned Baltimore architect Joseph Evans Sperry designed the buildings in the Georgian Revival style and connected them with elevated, colonnaded walkways.

Originally, the Service Building served as administrative and medical offices, as well as a pharmacy, dining hall and kitchen. The heating plant for the group was housed there, too. Building B was originally intended for infirmary and medical suites, and Buildings A and C were home to day halls and activity rooms on the bottom floors and dorm-style sleeping rooms on the upper floors.

It only took four years for this initial grouping to reach capacity, so in 1905, Warfield Cottage – also known as Building W – was opened. Owens and Sisco designed this building using classical ornament and detail freely, setting it apart from the earlier structures.

The year 1908 saw Building D completed to the east of Building W. Walter M. Gieske of Baltimore designed this one in step with the Service Group in appearance and layout. Building E was constructed by the Baltimore firm of Parker, Thomas and Rice in 1910. Once again designed in the Georgian style, Building E displayed a massive scale and front porch. The next building at Warfield was the Austin Crothers Cottage (Building F). This structure features a two-story colonnade porch and large cupola, giving it a similar appearance to Mount Vernon, home of George Washington. 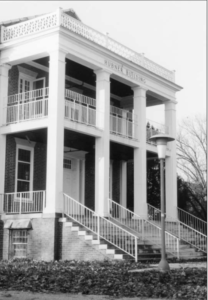 Thanks to the completion of Building F, the number of women patients could increase from 75 to more than 300. However, this flux put a strain on the dining area and other patient living facilities in the Service Building. So, the new Warfield Dining Hall (Auditorium) was constructed in 1913. Owens and Sisco designed this building as well. The 24,000 square foot building was situated between Buildings E and F, forming an open quadrangle with Building B.

In 1913, Building H was constructed amid worries that infection disease would spread through the complex just as it did in other hospitals. Tuberculosis and influenza posed serious health risks to staff and patients, thereby prompting the building of H. While the building is less decorative than the other structures, it still retains the brick façade and double hung wood windows. It also features three oversized cupolas to provide fresh air therapy to TB patients.

While Building H was being constructed, an Engine House was also built to accommodate the spur rail line that connected Warfield to the Baltimore and Ohio main line, which was being built down the hill adjacent to Butter Cup Road.

In 1912, the John Hubner Psychopathic Hospital was built on a hill across Piney Run from the women’s building group. The hospital was built to serve as a model to treat psychopathic patients, and its location and size reflect this. Parker, Thomas and Rice employed both the Georgian Revival and Colonial styles that were used in Buildings E and F. The building is laid out in a Geneva Cross plan due to its specialized functions and its use for male and female patients. The building boasted patient rooms, an immunology facility, medical library, morgue, hydrotherapy suites, surgery suites, and state-of-the-art laboratories. Architect Henry Powell Hopkins was hired in 1931 to expand the hospital; he built another Geneva cross plan along the south of the original building. 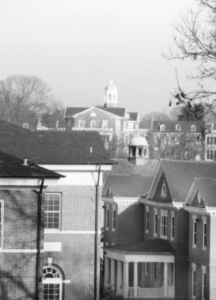 As World War I got underway, construction practically ceased at Springfield Hospital. However, after the war, the hospital received a small amount of money from the state legislature to build a Root Cellar near the Engine House, solving the large problem of plentiful storage space for produce from the hospital’s fields.

Henry Powell Hopkins was commissioned to build a new ward, Building G, in 1925. This building’s purpose was to house female epileptics who were being housed in Buttercup Cottage, one of the tenant farmers’ houses. If one examines the underground structure, he or she can see that hospital patients, not outside contractors, built it. Building G is u-shaped and features cast and poured concrete details, brick quoins and oversized orb finials along its brick structure.

Henry Powell Hopkins also constructed Building I, which was completed in 1928. Building I was used as an infirmary for non-tuberculosis patients who needed intensive care. This building displays double end chimneys and a two-story portico in the Colonial Revival style.

Designed by Henry Powell Hopkins, the Lane Building was the last to be added to the women’s colony. Completed in 1952, the Lane Building showcases a major shift in mental health care. It was built as four separate wards in an open square, divided by a corridor and common spaces for patients. Again, this building was designed in the Colonial Revival style.