Sykesville, MD was named one of the coolest small towns in America. One facet of the town’s past remains a centerpiece today: the railroad. Railway travel was a significant factor in creating and securing the foundation of Sykesville proper. Today, we honor this history through attractions like the S&P Railway model train displays and the Little Sykes Railway Park.

No matter when you visit, Sykesville is sure to offer something for everyone. Come explore and find out what makes Sykesville the Coolest Small Town in America.

A charming former railroad hub along the Patapsco River, Sykesville is home to a vibrant community, a thriving downtown, and numerous attractions for the whole family. As a state and nationally designated Main Street Community, the Town has plenty to offer its residents, business owners and visitors. Contact us today to find out how Sykesville and Warfield can be a part of your future.

Warfield is located on MD Route 32 in the Sykesville town limits and, in addition to substantial acreage for new construction, includes twelve separate buildings on a 17-acre parcel constructed in the early 20th century and utilized by Springfield Hospital Center until the early 2000s. The buildings carry historical designations from the National Park Service and Maryland Historical Trust and comprise about 185,000 square feet of the total 600,000 square feet of potential non-residential density. The existing buildings are eligible for federal and state historic tax credits because of these historic designations.

Located in the heart of Carroll County’s Piedmont region, Warfield at Historic Sykesville is a mixed-use project that is zoned for up to 600,000 square feet of office, light industrial, and retail space, approximately 181 residential units, a full-service hotel, and a 27-acre town park. Contact us today to find out how Warfield can be a part of your future.

On Wednesday, March 3, Senate Bill 885 was in front of Maryland’s Senate Budget and Tax Committee. We asked members of the community to assist in supporting the bill prior to the hearing, but this is just the beginning of the journey – there are still many ways you as a citizen can get involved to help this important legislation move forward.

The above video of the testimony for SB0885 is a great place to start for basic information about the Income Tax Credit for Catalytic Revitalization Projects. If you’d like to learn more about how you can support the bill, contact Steve McCleaf as soon as possible. No amount of support is too small – even something as simple as an email or letter to a legislator can make a big difference.

Things are moving quickly for proposed legislation that could act as a significant boost for Warfield and other large-scale historic preservation projects. Senate Bill 885, a potentially game-changing bill that proposes a tax credit for catalytic revitalization projects like Warfield, will be in front of Maryland’s Senate Budget and Tax Committee at 1 p.m. on Wednesday, March 3, 2021. Here are some main points of the bill, how the tax credit will benefit Sykesville, the Warfield project, the surrounding community, and the state, and how you as a citizen can get involved right now to give this bill the public support it needs to move forward in the legislative process. 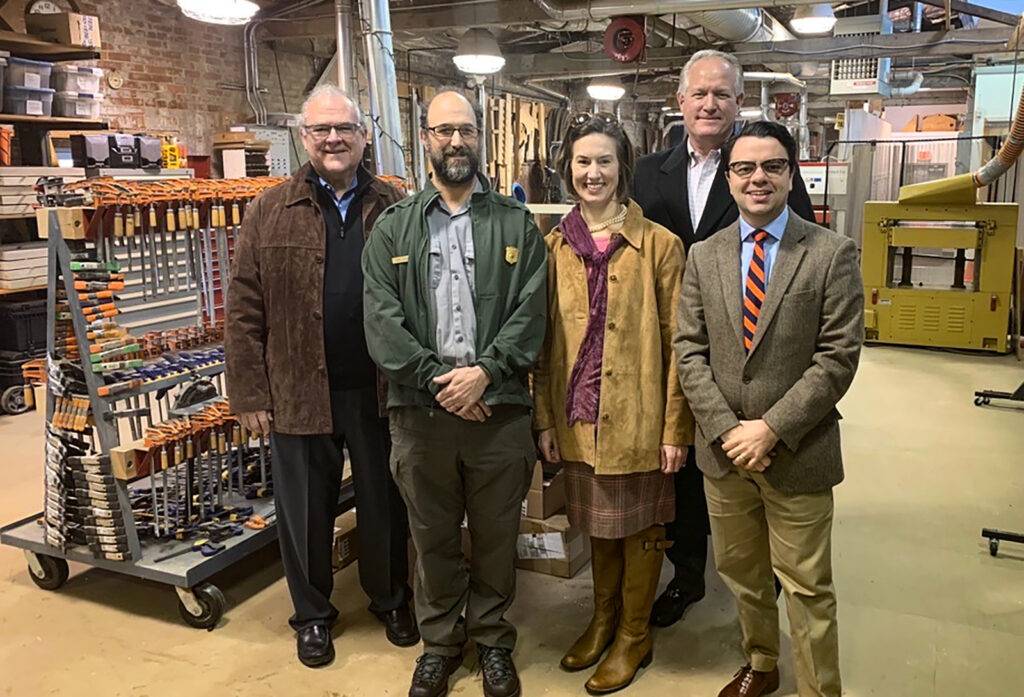 This bill was introduced by Senator Katie Fry Hester on February 9, 2021. The purpose of the bill is to allow the owners of qualified properties to claim a credit against state income taxes for certain rehabilitation costs and other construction costs for projects in the State of Maryland identified as “catalytic.”

According to the bill, a catalytic project must:

The tax credit would be in the amount of 20% of eligible costs up to a maximum of $15 million. Warfield would be able to make full use of this tax credit in rehabilitating the remaining vacant historic buildings located in Parcel D, which contains all of the project’s historic structures.

You can read the full text of the current draft of the bill here.

What This Bill Means for Warfield, the Sykesville Community, and the State of Maryland

The Warfield team has worked hard with Senator Hester, the Department of Planning, and the Department of Housing and Community Development on this bill because the existing Maryland Historic Preservation Tax Credit program falls woefully short of what is needed to support the redevelopment of Warfield and similar large historic complexes in Maryland. Current program caps currently stand at $9 million annually and $3 million per project (compared to $100 million in Virginia and even unlimited funding in several states).

All of this said, this bill is not just about saving and preserving cultural resources— it’s also about economic stimulus. When states invest in historic preservation tax credit programs, the result is community revitalization and economic development that pays for the tax credits many times over. Ethan Reed of Real Property Research Group estimates that each $1 of tax credits invested yields the state $8.13 in total economic output. He also indicates that job creation is significant, with 49.2 jobs created during the construction period throughout Maryland for each $1 million investment by the state.

If Senate Bill 885 is successful, Warfield would likely be the first project approved for the new catalytic tax credit given that the Warfield team has been at the forefront of the effort to champion this program. It is also important to recognize the positive impact that the tax credit proposed in this bill could have a huge impact in saving Warfield and several other historic campuses around the state and spurring economic development in the communities in which these complexes are located.

How You Can Get Involved

Public support for Senate Bill 885 is essential and we strongly encourage all members of the community to get involved as soon as possible ahead of the March 3rd hearing date. IF YOU WANT TO LEARN MORE AND HELP, please contact Steve McCleaf as soon as possible but no later than March 1, 2021.

Lastly, please sign up for updates on our website and to follow us on Twitter and Facebook for all the latest updates, as well as information on how to watch the testimony live as it happens. We will be posting links to the livestream on our social channels. 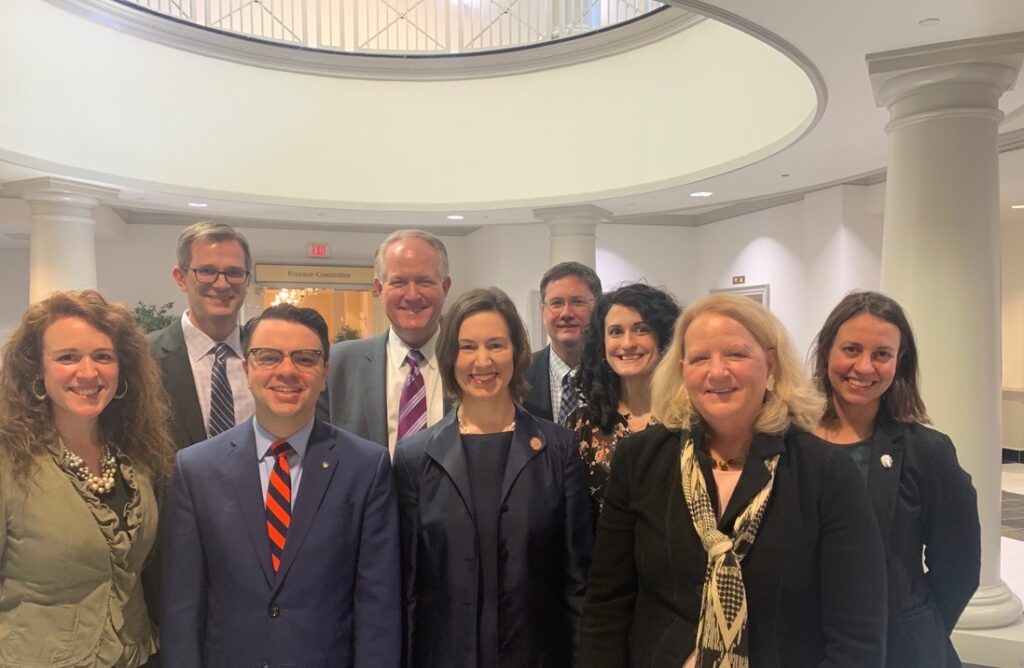 Historic preservation tax credits are the most significant source of project funding for rehabilitating historic complexes like Warfield. In addition to the Federal Historic Preservation Tax Credit Program, which is administered by the National Park Service and Internal Revenue Service, 39 states including Maryland have programs offering historic preservation tax credits. The federal and state programs all require rehabilitation of projects in accordance with the Secretary of the Interior’s Standards for Rehabilitation, which are quite extensive.

Unfortunately, the existing Maryland Historic Preservation Tax Credit program falls short in many respects as a public policy tool and provides limited incentives for developers to undertake historic preservation projects. We at Warfield have been vocal advocates of overhauling the Maryland program, starting with the removal of (or a significant increase in) current program caps which currently stand at $9 million annually and $3 million per project.

In general, developers will pursue a project only if it is financially viable without the state credit. The state credit does not provide a huge incentive to undertake difficult preservation projects and is often viewed by developers only as “icing on the cake.” Why is this? Simply put, low program caps make the process of securing state tax credits competitive, and therefore highly uncertain. In short, the current program is insufficient to create a true catalyst for rehabilitation, community revitalization, and economic development.

Also, the existing caps make the program insufficient to meaningfully benefit large projects. In the case of Warfield, we estimate that a project including rehabilitation of all nine of our remaining vacant buildings at once be mathematically eligible for approximately $10 million in tax credits, which far exceeds the current program caps. Although this $10 million state tax credit alone would not be enough to make rehabilitation of the property feasible, it would be a vital part of a package of incentives including the federal historic tax credit, federal low-income housing tax credit, and various other government grants and financing programs. The Warfield project requires an “all of the above” approach to financing, which is not uncommon with historic preservation deals – particularly large ones.

The Warfield team is working with state officials to find a solution to overcome deficiencies in the existing state historic tax credit program. In particular, we are working with Senator Katie Fry Hester (District 9) on a bill that would position Warfield to be the pilot project for a new “Catalytic Historic Tax Credit” that would operate outside of the state’s existing historic preservation tax credit program. This bill was originally slated for the 2020 legislative session, but unfortunately the COVID-19 crisis ended the session prematurely and killed any hopes for passage of the bill at that time. An updated bill will be introduced in the 2021 legislative session.

We believe that a “Catalytic Historic Tax Credit,” originally proposed at $10 million per project, would not only benefit Warfield but would also be a useful tool to help preserve many other state-owned or formerly state-owned historic campuses around the State of Maryland. We are grateful for Senator Hester’s support in sponsoring the legislation to get this potentially transformational program on the table.

Investment by states in historic preservation tax credit programs results not only in the preservation of historic resources but also in community revitalization and economic development that pays for the tax credits many times over. In The Economic Benefits of Maryland’s Historic Revitalization Tax Credit Program, Ethan Reed of Real Property Research Group estimates that each $1 of tax credits invested yields the state $8.13 in total economic output. He also indicates that job creation is significant, with 49.2 jobs created during the construction period throughout Maryland for each $1 million investment by the state.

Public support for the Catalytic Historic Tax Credit bill will be an important factor in getting this legislation passed. Be sure to follow us on Twitter and Facebook to stay current with the latest information on how you can get involved.